It took me a few tries to find the VP that works best for me.  This is the fourth VP I’ve had—the other 3 were all acquired secondhand, either in trade or bought as part of a lot.  The first two I got rid of in response to Want-To-Buy ads.  Later I got one of the special annual editions, but I wasn’t wild about quality of the finish—luckily I was able to sell it at the same price I bought it for.

Then, last year, the White and Black VP was released in the US.  This pen has been around in Europe for a while, and is often referred to as the Stormtrooper VP.  When I stumbled across the pen on sale I decided that this was the VP I wanted for my collection.  One of my previous VPs had a custom stub which I liked quite a bit, so I decided to try this pen with a factory stub.

Pens can catch your eye for several reasons.  There are pens in collection that grab my attention because if their beautiful material, their craftsmanship, and their simple artistry.  The VP is not one of those pens.  If the VP catches your eye it’s either for it’s odd looks, or it’s functionality.  It’s not ugly by any stretch, but neither is it pretty.  Even the special edition I had, was kind of flat.  I suppose it difficult for a pen with a metal body to have much depth to the look of the material.  As such, I think this pen looks best in solid colors.  This particular one appealed to me because the stark white with black hardware looks like it was inspired by Star Wars’ Stormtroopers.  Do I think it looks pretty?  No.  Do I think it looks sleek—maybe even cool?  Yes.

The clip of the VP—it seems like you either hate it, or it doesn’t bother you.  I’m not gonna beat a dead horse, so I’ll just say I’m in the “doesn’t bother” camp—for the most part (and I’ll get to that).  However this pen had a problem that none of the first three had.  That problem caused me a few weeks of frustration, and lead me to reexamine my relationship with two different pen stores.

When this pen first arrived, there was a problem with the alignment of the nib—it was off kilter by somewhere between 5°-10°.  With a normal pen I would just rotate my grip a tiny bit, but the clip placement on the VP makes that impossible.  The nib is held in place by fittings inside what I’ll call the cap, and when I looked inside the pen the door that seals the pen shut was off-center and was causing the nib to rub against the door, which in turn caused ink to pool inside the cap if the nib was extended and retracted several times during a writing session.

Even though I reported this problem to the online store I bought it from, they refused to allow me to return or exchange the pen.  They did offer to act as an intermediary between me and Pilot warranty service (which they said could take up to eight weeks), but as I’m perfectly capable of doing that myself, I didn’t feel they could be any help to me.  Without naming the online store, I will say that because of this I doubt I will buy pens from them again—I may buy ink from them if I can’t find it elsewhere, but even that is doubtful.

Later the same week, while I was in a local stationery/pen store to pick up some Rhodia DotPads, the shopkeep struck up a conversation.  I’ve not previously considered this shop for anything but paper, because in the past I’ve found the owner a little heavy-handed as a salesman, but this wasn’t the owner and they were less pushy.  After a short discussion about my new VP, they gave a call to their Pilot representative and got the OK to switch out the cap section for me. Everything is fine with the new cap, and my local store (not to mention Pilot) has earned some new business.

This is the only VP I’ve had this problem with, but it’s also the only one I bought new, and it makes sense that a used pen wouldn’t have this issue, as the owner likely would have solved it already.  It’s a solid pen, for sure, but the mechanics of the retractable nib, and the apparatus inside that hold everything in place, all seems a little prone to damage.

My general score for a converter pen is a 7.  When it comes to filling, this pen has some plusses and some minuses, which kind of cancel each other out.

Minuses: You have to remove the nib to fill it—it’s a mild inconvenience, but it’s still an extra step. Also, no matter which of the converters you choose—and there are three options—you don’t get much ink.

Plusses: While it’s an inconvenience to remove the nib for filling it does make it easier to fill from smaller bottles, and also makes it easier to clean off the nib. 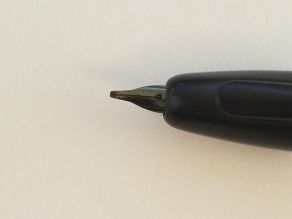 It’s hard to complain about an 18k gold nib for a pen in this price range, and basically I’m happy with it.  It’s not the smoothest stub nib I’ve tried, but neither is it the worst.  It does dry out faster than I would like, but as long as I keep writing it’s not an issue.  I know some who have reviewed the stub nib have said that if you write at a shallow angle the nib has a tendency to skip a bit, but I was unable to replicate this problem.

Writing with the VP is fine.  It’s not an experience I’m in love with, but to me that’s never been the VP’s selling point.  But the pen writes well enough that I forget about it and can just write.  The clip placement and metal body mean it’s not the best pen for long stretches of writing, but for me it’s the perfect pen to have at the ready for notetaking in meetings.

This isn’t one of those pens I keep in my collection because it’s a joy to write with.  I like to keep a VP around because it’s unique, but moreover because it’s a crazy convenient way to keep a fountain pen at the ready, and even though it’s not a top-of-the-line writing experience it’s still a comfortable pen—with a stub—for a good price.