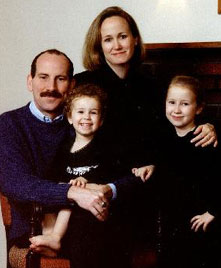 Charles and Leslie boarded American Airlines Flight 77 with their two daughters, Zoe and Dana, en route to Canberra, Australia, for what family members said was a dream, working vacation. Leslie, who was an associate professor at Georgetown was going for a short stint as a visiting fellow at Australian National University at Canberra. She was bringing her family down under for a once-in-a-lifetime trip. They had just moved out of their home, in fact they spent their last few days before 9/11 in a hotel, and upon their return to the states, were moving into a new house in Chevy Chase.

Charles Falkenberg was a software engineer had spent six years designing software for oceanographers, ecosystem and space scientists. He had also worked with scientists researching the the long-term impact of the Exxon Valdez oil spill.

It’s difficult to write about the lives of two children who were too young to have really begun to live them. I know that both girls had taken swimming lessons at the YMCA, and that they accompanied their mother to work often enough that her coworkers had fond memories of their visits, particularly of Zoe’s flamboyant outfits.

To help cope with the grief of losing an entire family, the girl’s grandparents have asked people who wish to remember the Falkenbergs, to plant Zinnias, Zoe’s favorite flower.

Two years ago, my family and I planted zinnias under an arch of jasmine. Each year they bloom stronger, larger, and more beautiful than before…

14 thoughts on “The Falkenberg Family”